US Single-Family Rents Up 2.9 Percent Year Over Year in July 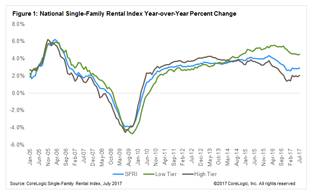 Single-family rents, as measured by the CoreLogic Single-Family Rental Index (SFRI), climbed steadily between 2010 and 2016. However, the index shows year-over-year rent growth has decelerated slowly (Figure 1) since February 2016, when it peaked at 4.4 percent. In July 2017, single-family rents increased 2.9 percent year over year, a 1.5 percentage point decline since the growth rate peaked at 4.4 percent in February 2016. The index measures rent changes among single-family rental homes, including condominiums, using a repeat-rent analysis to measure the same rental properties over time. Read More

Sign up today for a demo. Demos are for partnership opportunities for Brokers, MLS and Marketing Affiliates.